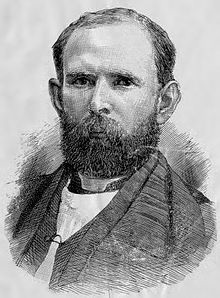 James Hannington was born in Hurstpierpoint, a few miles north of Hove, on September 3rd 1847.
His father had his own counting house in Brighton, and was part of the family that owned Hannington’s department stores which closed a few years ago. James was an avid collector as a boy. After school he naturally joined his father’s business.

In 1867 the chapel which his father had built in the grounds of his property was licensed for Anglican services. James’ attendance there led him to move towards ordination, and in 1868 he entered St. Mary’s Hall, Oxford, and was ordained on March 1st 1874. At this point James was ‘not right with God’, and it was not until he read the book ‘Grace and Truth’ by Dr. Mackay some months later that he realised that his sins were forgiven. “My eyes were opened” he wrote.

In 1875 James became curate-in-charge at St. George’s, Hurstpierpoint where he stayed until 1882 when he volunteered for service in Uganda with the Church Missionary Society. He had by then been married for five years. He left England in May 1882 and arrived in Africa on June 29th. The next year was one long trek into the heart of Africa during which James suffered recurring fevers from which he was never to completely recover.

He returned to England in 1883 to be told that he must never again visit Africa, but by April 1884 his specialist told him that he was well enough to return. On June 24th he was consecrated Bishop of Eastern Equatorial Africa and returned.
His last expedition was into Masai territory with a group of about 200 porters, and William Jones, a native clergyman who Bishop Hannington had recently ordained. The journey of his ‘army of peace’ left base on July 23rd but on October 12th James left the main party with 50 picked men to visit missionaries in Uganda. On the 21st his party was ambushed.

His journal tells what happened next: “…suddenly about twenty ruffians set upon us. They violently threw me to the ground, and proceeded to strip me of all valuables. Thinking they were robbers I shouted for help, when they forced me up and hurried me away, as I thought, to throw me down a precipice close at hand. I shouted again in spite of one threatening to kill me with a club. Twice I nearly broke away from them, and then grew faint with struggling and was dragged by the legs over the ground. I said, ‘Lord, I put myself in Thy hands, I look to Thee alone.’ Then another struggle and I got to my feet and was then dashed along. More than once I was violently brought into contact with banana trees, some trying in their haste to force me one way, others the other, and the exertion and struggling strained me in the most agonizing manner. In spite of all, and feeling I was being dragged away to be murdered at a distance, I sang ‘Safe in the Arms of Jesus’ and laughed at the very agony of my situation. My clothes were torn to pieces so that I was exposed; wet through with being dragged on the ground; strained in every limb, and for a whole hour expecting instant death, hurried along, dragged, pushed at five miles an hour, until we came to a hut…”