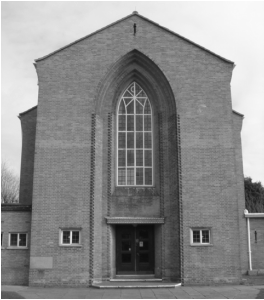 During the early 1930s Hove Corporation decided to create a large residential area to the North of the Old Shoreham Road and to the West of Nevill Avenue. At this time the land was mostly farmland up to the Downs, with the odd remote farm labourer’s cottage. This huge area was served by St Helen’s Church, Hangleton and St Peters, West Blatchington and it was decided that another Church was needed and that St Peter’s would be re-built to cope with the large number of families that were expected to occupy this enormous area.

Around the same time this part of Hove was being developed for housing it was decided to build a new Cathedral in Guildford and a team led by Edward Maufe were commissioned by the Church Authorities, but to help with the ‘buildability’ of the design it was proposed to try it out on a smaller Parish Church first, the new Church in Hove (Bishop Hannington Memorial Church) was selected for the trial. Bishop Hannington Church was also a product of the Bishop of Chichester’s Sussex Church Builders Scheme running at this time.
​
Bishop Hannington Church was to initially operate from a new building in Holmes Avenue, this is now the Church Hall, until the new, conventional Church was built. A site for this was reserved at the junction of Holmes and Nevill Avenues and building began in 1938, just before the outbreak of WW2. The church was completed and consecrated on November 2nd 1941. In 1981 work started on construction of a new Church Centre which was added to the North side of the original structure. This consists of 3 teaching rooms (to build upon work that up till then had been done at the old Hall), a Parish Office and a large kitchen. Around the same time the original Hall was re-ordered; primarily conversion of the original raised platform/stage at the West end into a self contained meeting and teaching room and new enlarged kitchen and toilet facilities. At the Church the Chancel was re-ordered, the choir stalls were removed and the Travertine marble carpeted over (the marble didn’t extend to the Choir stalls!). In the Nave the original pew seats were replaced by more comfortable upholstered ones. The Church Centre was refurbished in 2013, and the Youth and Community Centre in 2018.